Norman Rockwell: Behind the Camera

Norman Rockwell: Behind the Camera is the first book to explore the meticulously composed and richly detailed photographs that Norman Rockwell used to create his famous artworks. Working alongside skilled photographers, Rockwell acted as director, carefully orchestrating models, selecting props, and choosing locations for the photographs–works of art in their own right–that served as the basis of his iconic images. Readers will be surprised to find that many of his most memorable characters-the girl at the mirror, the young couple on prom night, the family on vacation-were friends and neighbors who served as his amateur models. In this groundbreaking book, author and historian Ron Schick delves into the archive of nearly 20,000 photographs housed at the Norman Rockwell Museum. Featuring reproductions of Rockwell’s black-and-white photographs and related full-color artworks, along with an incisive narrative and quotes from Rockwell models and family members, this book will intrigue anyone interested in photography, art, and Americana. [Buy it on Amazon]

I got a copy of this book shortly after it was released in 2009. I’ve always found great pleasure in the “comfort food” of Rockwell’s paintings for the cover of the Saturday Evening Post, and this book makes them even more delicious.

A review of the book on the tech-and-design Gizmodo website, titled “Norman Rockwell: The Original King of the Photoshop,” brings Rockwell into the 21st century with his techniques:

Back when Norman Rockwell ruled Saturday evenings, Adobe wasn’t even a gleam in some nerd’s eye, but a new book shows that the painter was, nevertheless, a photoshop god.

Very few Gizmodo readers were even born when Rockwell painted his last Saturday Evening Post cover, but we all know them. You hear that name and suddenly you can picture those overly detailed, cartoonishly dramatic but ultimately kinda corny depictions of American life. Well, Norman Rockwell: Behind the Camera, written and compiled by Ron Schick, has given me immense newfound respect for the man, for the meticulous photography, the real people and the unintentionally hilarious DIY props and sets that he required to make his painted fantasies of Americana come true.

In other words, folks today use the Adobe Photoshop digital art program (or one of its imitators) to create “photographs” of objects or scenes that never really existed, by digitally combining and/or altering photographic elements on a computer screen. Norman Rockwell’s creative process was very much the same, just without the computer. He would first carefully create what are called “reference photos” of people posed individually and in groups, and of props and background elements, and combine them with his paintbrush on a canvas to depict a scene that never really existed—but is totally believable as if it was a photo itself!

Below is a selection of photos of some of Rockwell’s most famous paintings, and some of the black and white reference photos he used. (He always used black and white—the colors in the final artworks were always his own fresh choices.) The comments below the first two are from the Gizmodo article.

The Final Impossibility: Man’s Tracks on the Moon, 1969

Yep, here’s proof that the moon landing was faked. At least, Rockwell’s commemorative portrait of it was. NASA loved his work, so they loaned him spacesuits and helmets whenever he wanted, and for this, he got permission to photograph his models moonwalking around an Apollo Lunar Lander, with a black tarp doubling for infinity and beyond. Remember, this is when Apollo was new and the Cold War was in full swing, so getting access to the latest NASA toys took clout.

What I liked about this picture is that you get to see how ridiculous Rockwell’s sets could often be. He needed real faces, but he could fill in the rest. Hence piling chairs up on top of an old desk to simulate bleachers at the circus. Good thing nobody fell off the back and sued ole Rocky for millions—that twine used to hold the little girl’s chair in place doesn’t look OSHA certified. If the geeky looking fellow in the front looks familiar, it’s because Rockwell himself served as a model for his paintings all the time. 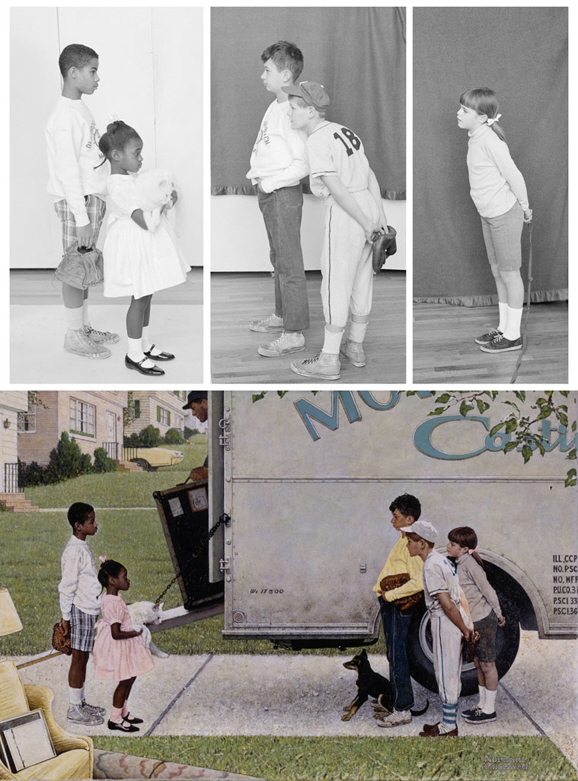 New Kids in the Neighborhood 1967

And finally, one of my favorite Norman Rockwell paintings…

…which has inspired many spoofs, including this one, my favorite… 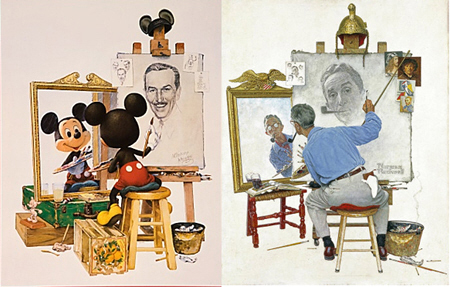 This entry was posted in Pop Culture and tagged Norman Rockwell, Pam Dewey. Bookmark the permalink.

2 Responses to Norman Rockwell: Behind the Camera